Posted by StevenLeeDouglasWV on July 1, 2017
Posted in: Uncategorized. Leave a comment

From Wikipedia, the free encyclopedia

The Monongah mining disaster of Monongah, West Virginia, occurred on December 6, 1907, and has been described as “the worst mining disaster in American History”. The explosion occurred in Fairmont Coal Company’s No. 6 and No. 8 mines. 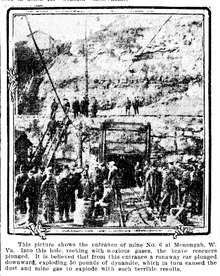 Rescuers going into the mouth of the No. 6 mine, newspaper photo.

On Friday December 6, 1907 there were officially 367 men in the two mines, although the actual number was much higher as officially registered workers often took their children and other relatives into the mine to help. At 10:28 AM an explosion occurred that killed most of the men inside the mine instantly. The blast caused considerable damage to both the mine and the surface. The ventilation systems, necessary to keep fresh air supplied to the mine, were destroyed along with many railcars and other equipment. Inside the mine the timbers supporting the roof were blown down which caused further issues as the roof collapsed. An official cause of the explosion was not determined, but investigators at the time believed that an electrical spark or one of the miners’ open flame lamps ignited coal dust or methane gas.[1]

Artistic view of the explosion at the No. 8 mine.

During the early days of coal mining, time was of the essence to bring people out alive. The first volunteer rescuers entered the two mines twenty-five minutes after the initial explosion.[2] The biggest threats to rescuers are the various fumes, particularly “blackdamp”, a mix of carbon dioxide and nitrogen that contains no oxygen, and “whitedamp”, which is carbon monoxide. The lack of breathing apparatus at the time made venturing into these areas impossible. Rescuers could only stay in the mine for 15 minutes at a time.[3] In a vain effort to protect themselves, some of the miners tried to cover their faces with jackets or other pieces of cloth. While this may filter out particulate matter, it would not protect the miners in an oxygen-free environment.[4] The toxic fume problems were compounded by the infrastructural damage caused by the initial explosion: mines require large ventilation fans to prevent toxic gas buildup, and the explosion at Monongah had destroyed all of the ventilation equipment. The inability to clear the mine of gases transformed the rescue effort into a recovery effort. One Polish miner was rescued and four Italian miners escaped.[5] The official death toll stood at 362.[6]

As a result of the explosion, along with other disasters, the public began demanding additional oversight to help regulate the mines. In 1910 Congress created the United States Bureau of Mines, with the goal of investigating and inspecting mines to reduce explosions and to limit the waste of human and natural resources. In addition the Bureau of Mines set up field officers that would train mine crews, provide rescue services, and investigate disasters when they do occur.[7]

Officially, the lives of 362 workers, including children, were lost in the underground explosion, leaving 250 widowsand more than 1,000 children fatherless. In October 1964 Reverend Everett Francis Briggs stated that “a fairer estimate of the victims of the Monongah Disaster would be upward of 500”.[8] This estimate was developed by averaging selected estimates – an unorthodox methodology.[9] This estimate is corroborated by the research of Davitt McAteer, Assistant Secretary for Mine Safety and Health Administration at the United States Department of Labor during the Clinton administration.[10] The exact death toll remains unknown.

Today a granite marker in the Mt. Calvary Cemetery commemorates those who died in the blast, most of whom were Italian immigrants.

In 2007, to commemorate the 100th anniversary of the explosion, the Italian region of Molise presented a bell to the town of Monongah. Today the bell sits in the Monongah town square.[12]

On May 1, 2009, the President of the Italian Republic, Giorgio Napolitano, conferred the honor of “Stella al Merito del Lavoro” (Star of Reward of Work) upon the victims of the disaster.